Fix the glare on your Plasma TV
Protects your screen from scratches, dust, dirt and debris

How do I order a custom GlareStopper™ screen? 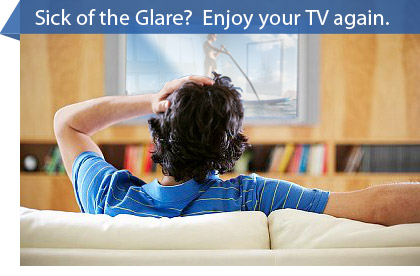 The best way is to order online by entering the size of you TV screen into the custom quote box. You will receive an immediate price for the custom screen. Just add the screen to your cart and complete the secure checkout. Your screen will made and shipped within a day or two.

How long does it take to get my GlareStopper™ screen?
Your order should ship within 1-3 business days after you complete your checkout. With our free Priority Shipping it should arrive within 2-3 more days. For instance, if you place your order Monday morning you could receive your custom screen as early as Wednesday and probably no later than Saturday.

Orders outside of the United States can take about 1-2 weeks delivery with USPS Priority International shipping.

Do you ship outside of the United States?
Yes! We ship all over the world. Just choose your country during checkout and the shipping total will update in your shopping cart. USPS Priority Shipping to most countries costs about $20.00 - $40.00 USD, depending on where you live.

**Right now we are offering FREE shipping within the United States. We can't ship international for free... but we will pay the first $12.95 of your international shipping! This offer is valid ONLY during our free shipping promotion. The $12.95 discount can be seen in your shopping cart after choosing your country during checkout.

How is my GlareStopper™ screen packaged and will it arrive undamaged?

Your screen will be rolled and packaged in a thick tube to help avoid any damage in shipping.

Also, the GlareStopper™ screen is manufactured between two protective layers that you will remove during installation. These layers keep the screen in perfect condition and the clingy side safe from dust and dirt.

How much glare does this remove? 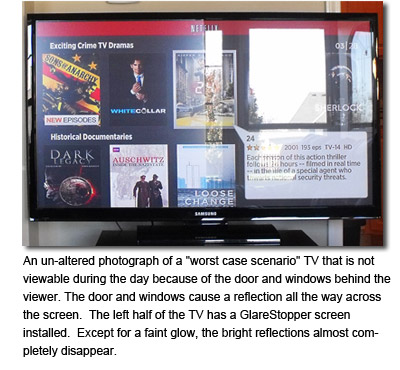 Great question... about 90% or more of the glare will disappear when the screen is installed. An example would be a bright window behind the viewer. If you can see the reflection of a window in your TV you can probably see the details of the window and everything else in the background when looking at your TV.

When the screen is installed you will not be able to see any details, and unless the sun is directly in the window you won't be able to tell where the window even was. It will mostly be gone. If the window is very bright you might be able to see a slight glow where it is. But it won't stop you from seeing the TV like it did before.

We've had customers tell us the reflection was so bad they could use the TV as a mirror to get ready in the morning. After the screen was installed you couldn't see your face even if you wanted to.

Will the GlareStopper™ screen affect my HD picture?
VERY little. Technically, about 97% of the light still passes through the screen after installation. This is not enough of a change for most people to see with the naked eye. You could adjust the brightness on your TV up one click if you wanted to make up the difference. For most people this is not necessary.

For testing purposes we have installed a GlareStopper™ on half of a TV and left the other half bare. When the lights are on it is easy to tell which half has the GlareStopper™ because there is no reflection on one side, and a lot of reflection on the other. But when the room was made dark (except for the TV of course) you could not tell which side had the screen on it. The picture was the same on both sides.

Is it hard to install my GlareStopper™ screen?
It isn't hard to install the screen. But we recommend at least two people work together during installation and follow our instructions for the best results.

This will make installation much easier by reducing the number of bubbles you have to smooth out and keeping dust from sticking to the back of the screen. Read the full installation instructions for specifics on how to install the film properly.

Wii remotes, footballs, bowling balls and shotgun blasts will most certainly damage your TV even with the GlareStopper™ screen installed. (Yes, those are real world examples of damaged TVs we have been asked to fix in the past. Most were done on accident. Some were not.)

My friend has the same TV and I love his GlareStopper™ screen. Can I order using my friend's dimensions?
Absolutely, we will just need some information to get the dimensions they used and apply them to your order.

I need a large quantity of GlareStopper™ screens. Can I get a price break?
Sure. Just contact us for more information.

contact
*most screen images are simulated unless otherwise stated